Anubis the Barkless Dog returns with this silly homage to one of the season’s best-loved franchises!

From the team behind The Halloween Kid.

The Halloween season is here! To celebrate, here’s a spooky little short for you.

Courtesy of a few people behind The Halloween Kid (Axelle Carolyn, James Webber, Neil Marshall, Poppaea Bicknell), and of my Basenji puppy, Anubis!

Here’s the behind-the-scenes featurette for The Halloween Kid! Filmed and edited by Jamie Hooper of Fingercuff Productions, it’s a pretty  comprehensive look at the making of our little fairytale, including our voice-over session with Sir Derek Jacobi and music score with composer Christian Henson.

Filmmaker, artist and jewelry designer Tonjia Atomic has created an exclusive pair of skull-shaped earrings named after me, as part of her celebration of Women in Horror month!

They’re pretty brilliant, as you can see for yourselves:

I’ve never been a fan of Valentine’s Day, but this year I thought I’d look into vintage cards… and as it turns out, there’s a fair amount of creepy ones out there.

So here’s my selection, from threatening…

Although it’s unrelated to filmmaking or The Halloween Kid, I couldn’t help sharing the news that one of my short stories, Butterfly, will be published in the Mammoth Book of Body Horror, out March 1!

TRANSFORMATION by Mary Shelley;
THE TELL-TALE HEART by Edgar Allan Poe;
HERBERT WEST: RE-ANIMATOR by H.P. Lovecraft;
WHO GOES THERE? John W. Campbell;
THE FLY by George Langelaan;
TIS THE SEASON TO BE JELLY by Richard Matheson;
SURVIVOR TYPE by Stephen King;
THE BODY POLITIC by Clive Barker;
THE CHANEY LEGACY by Robert Bloch;
THE OTHER SIDE by Ramsey Campbell;
FRUITING BODIES by Brian Lumley;
FREAKTENT by Nancy A. Collins;
REGION OF THE FLESH by Richard Christian Matheson;
WALKING WOUNDED by Michael Marshall Smith;
CHANGES by Neil Gaiman;
OTHERS by James Herbert;
THE LOOK by Christopher Fowler;
RESIDUE by Alice Henderson;
DOG DAYS by Graham Masterton;
BLACK BOX by Gemma Files;
THE SOARING DEAD by Simon Clark;
POLYP by Barbie Wilde;
ALMOST FOREVER by David Moody;
BUTTERFLY by Axelle Carolyn;
STICKY EYE by Conrad Williams.

Introduction by Stuart Gordon (Director of Re-Animator and From Beyond).

I couldn’t possibly be in better company! You can pre-order it here.

The first public screening of The Halloween Kid has just been announced!

The Halloween Kid will premiere at the prestigious International Children and Young People’s Film Festival in Malmo, Sweden, in March.

I’d never thought of it as a children’s film while we were making it, but once someone had suggested the idea, it seemed to make sense. Like the works of the people who inspire me (in this case, geniuses like Edward Gorey or Guillermo del Toro), it mixes fantasy and the supernatural in a way that seems suitable for children. And the lead is seven years old.

To celebrate, we’ve put together a little teaser trailer!

I’m very proud to say that The Halloween Kid has received its first festival selections! I can’t wait to announce them. We’re going for an interesting mix of mainstream, horror, and children’s festivals… In the meantime, here’s a couple of new stills from the film.

*** SPOILER WARNING – Have you watched The Last Post on Vimeo yet? ***

The Last Post was self-funded and shot in one crazy 12-hour day in a West London hospital, on the Red One.

Pre-production went by very quickly. I’d written the script months before, and between the moment we decided to shoot the film and the day we actually stepped foot on set, we had barely three weeks.

Our first challenge was casting. Darren Bransford (Hollyoaks, Psychosis), who plays Jean, was first on board. A fantastic actor and a great friend, Darren was a no-brainer. His character appears only for brief moments, but it was essential that he would convey the right emotions as he represents Colette’s past, her regrets, and her nostalgia.

Darren’s task was rather thankless, as he could only be seen for a few seconds without his mask. But on the plus side, he did get to wear a cool uniform…

The wonderful Jean Marsh (Upstairs Downstairs, Willow, Return to Oz, The Changeling) was suggested and approached by our casting director, Manuel Puro. A true francophile, she seized the opportunity to play a French lady, with a slight accent. She was also absolutely fearless in her portrayal of an elderly lady: while Jean is, in real life, quite stunning and glamorous, she was happy on set to have our makeup designer, Jane Stiefel, add grey to her hair and give her an ageing, unflattering makeup.

I’d been a fan of Kimberley Nixon (Fresh Meat), who plays Nurse Sophie, since I’d seen her in Black Death. She was my first choice and said yes straight away, luckily. Her chemistry with Jean was wonderful.

Another challenge was to turn the hospital ward we’d found into a cosy nursing home room. It required some changes to the script (the ghost originally appeared in the garden outside, but the view through the window made it impossible) and the work of production designer Caroline Story, who collected an impressive amount of elements that helped give the impression that this was a place where Colette had assembled the things that mattered most to her.

This is what the ward looked like when we first recce’d it: 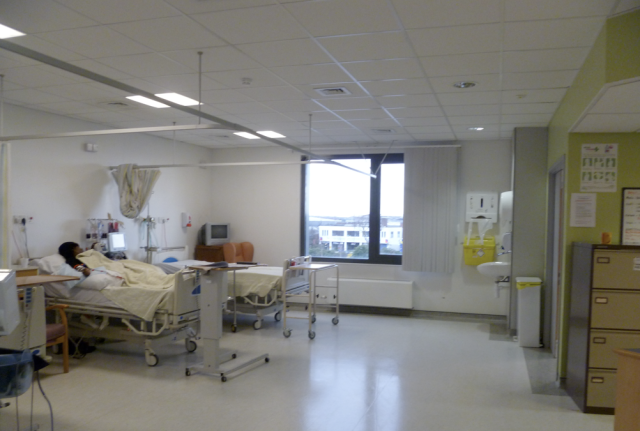 And during the shoot (with DoP Gary Shaw to the right):

As the story was inspired by my own family, I brought some personal items – pictures of me as a little girl reading books with my dad, for instance, can be seen early in the film.

Also, as Colette is supposed to be in her eighties, and she was a teenager during World War I, the story had to be set in the 1980s. While we didn’t want to turn it too obviously into a period piece, we had to make sure nothing in the room would seem too contemporary. This also explains the very old-fashioned nurse uniform our costume designer Aoife McBride chose for Sophie.

We dressed the ward the night before the shoot and pre-lit as much as we could. Shooting a 10-page script in 12 hours is pretty damn near impossible (it’s the equivalent of shooting a feature in 9 days), so we had to make sure we had as much time for actual filming as possible. We had to move on to a different set-up every 20 minutes on average – meaning that not only did the actors never get more than a couple of takes and had to be on the ball all the time, and that the director of photography and his very small team had to light each set-up very fast, but also that I’d have to make decisions quickly and decide if we had the shot, without the luxury of getting one more for safety. 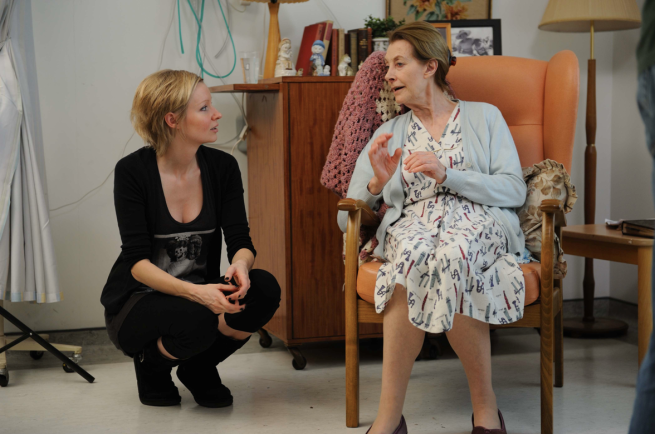 We also had to know exactly what we were shooting and in what order; there was very little space for improvisation on the day. I’d storyboarded everything carefully, and 1st Assistant Director Simon Hedges (right on the pic below) drew up a schedule which respected story order as much as possible, while limiting the amount of lighting work and set re-dresses. 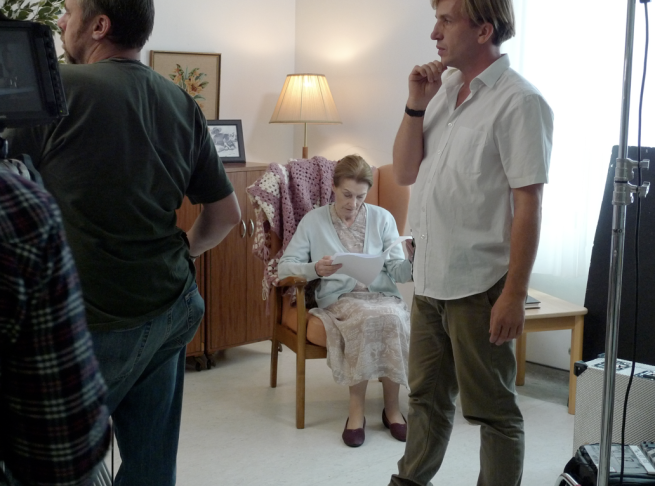 The other clock we always had to keep an eye on was the one in the background of the room – did you notice it? The time had to be adjusted for each scene.

One of the most difficult scenes to shoot – especially for Jean – was the one at the window, where Colette reads her lost love’s last letter. Being given only a few minutes to collect yourself for such an emotional moment is a pretty insane challenge, so we straight away made the decision to resort to fake tears. Jane applied tears in Jean’s eye (a fairly uncomfortable process) as soon as the camera rolled, just before action; and Caroline dropped tears on the letter on cue. 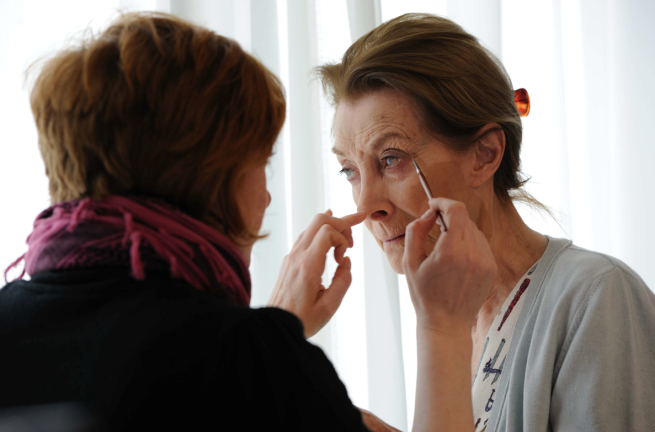 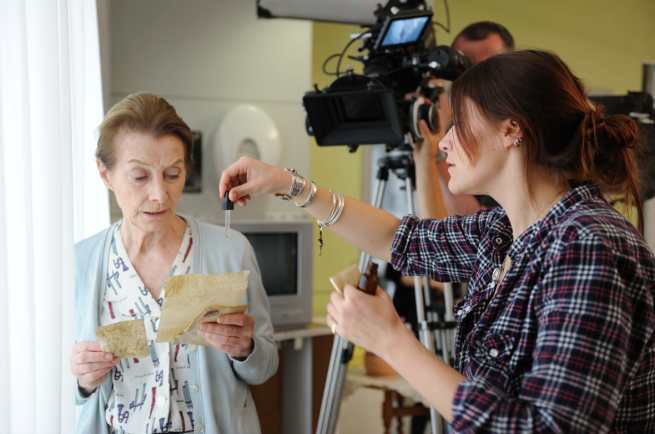 An essential crew member you may have spotted in the credits, by the way, was James Webber, 2nd Assistant Director on this film and producer on The Halloween Kid. He’s here, looking very mysterious, next to sound designer Nigel Albermaniche:

In the end, we managed to make our day without dropping more than a couple of non-essential shots. The ending, which we had to shoot last because of the bigger re-lighting work involved, had to be shot very quickly; in the edit, I wished we’d had a bit more time…

Sadly we never got the time to take a cast and crew photo.

Just like for The Halloween Kid, Neil Marshall edited the film – although here he did it on the Avid while Halloween Kid was edited at home, on Final Cut Pro – and Christian Henson composed a score which really gave The Last Post its soul.

You’ll find the link below – I really hope you enjoy it. We were lucky enough to screen it in 15 festivals over the past 6 months, including a fantastic screening at the London FrightFest, and at Fantasia in Montreal, as well as in Sitges.

The Last Post is the story of Colette, an old lady in a nursing home, who is visited by a mysterious stranger no one else seems able to see…

Expect atmosphere and nostalgia rather than scares and gore, by the way.

Here’s what the web said:

“A successful, contemplative mood piece, as touching as it is effective, and hopefully a mere taste of what this promising director might have in store” (Fangoria)

“Leaves us ‘haunted’ by feelings of joy or even peace” (DreadCentral)

“A haunting and poignant short that oozes class and sophistication” (HorrorTalk) 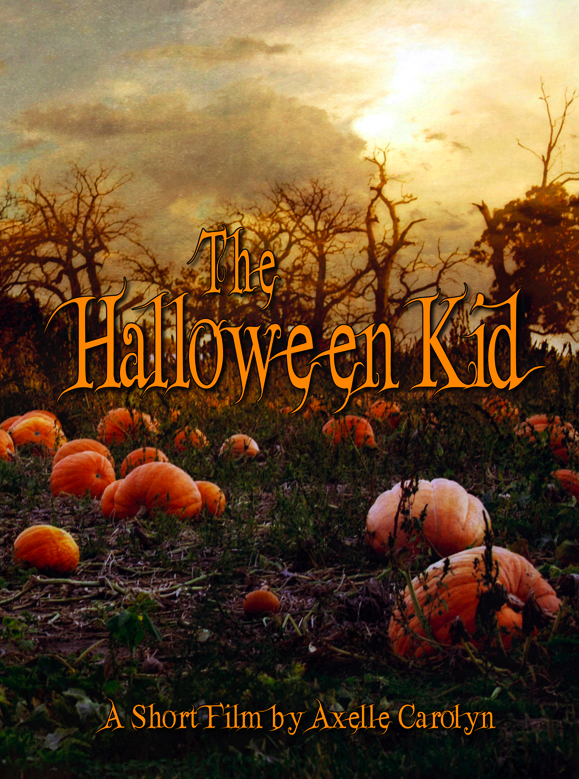